Do you love history adventures? If you’ve ever imagined what it must have been like to recreate back in the old days, taking a hiking tour through what remains of Rose Island Amusement Park would give you a good idea. Located along the banks of the Ohio River in Charlestown State Park where it is both protected and maintained, the remnants of Rose Island linger as a testament to the precious commodity of leisure time.

The land started out as a park where many Louisville churches took picnics along the banks of the Ohio River. They’d travel by paddleboat to the what was then called Fern Grove. Later, in 1818, the Louisville and Jeffersonville Ferry Company, hoping it would attract more business purchased the land as a stopping point for passengers. Visitors would disembark and spend the day picnicking on the peninsula and enjoying nature.

A hotel was built there in the 1920s and in 1923 David Rose, a prominent Louisville businessman, purchased the property and built the swimming pool, zoo, dance hall, golf course, a dining facility, and cottages. Later the land was bought by a private entity and Rose Island Amusement Park was born.

After a two hour drive from Indianapolis, we arrived at Charleston State Park and found a picnic area where we could have lunch. My companions for the day…my daughter, Ariel, and my son, Kestrel!!

Then we began our hike to Rose Island, crossing the Bridge where we stopped to watch some very large fish and turtles in the water below.

For us, walking through the woods of what used to be a 1920s playground, the fun part was sleuthing around and trying to figure out what the various concrete remnants might have been. The archways along the Walkway of Roses marked the main path through the middle of Rose Island linking the boat docks with the cabins, dance hall, cafeteria and pool facilities. They called this the “Walk of Roses.” I imagine they may have planted various species of rose bushes to line this popular walking path.

The pool was filled with gravel in the late 1980s for safety reasons. Even though it still held water, it had become overgrown with weeds and resembled more of a concrete pond like in the Beverly Hillbillies. Today the metal steps and edges are all still very much intact. On one end you can still see the concrete foundation and drains of what would have been the poolhouse and shower area.

Here I am standing where the Dance Hall used to be. The blue band around the post shows the water level during the flood of 1937. Anyone want to swing??

Beyond the pool, we found an octagon-shaped concrete foundation which we think may have been the base for the carousel, the only actual “ride” in the park.

On the far end of the amusement park, we found what remains of the boat landing where riverboats would stop and allow visitors from Louisville to disembark. The three large pillars held Rose Island’s large metal signage, now entirely gone. 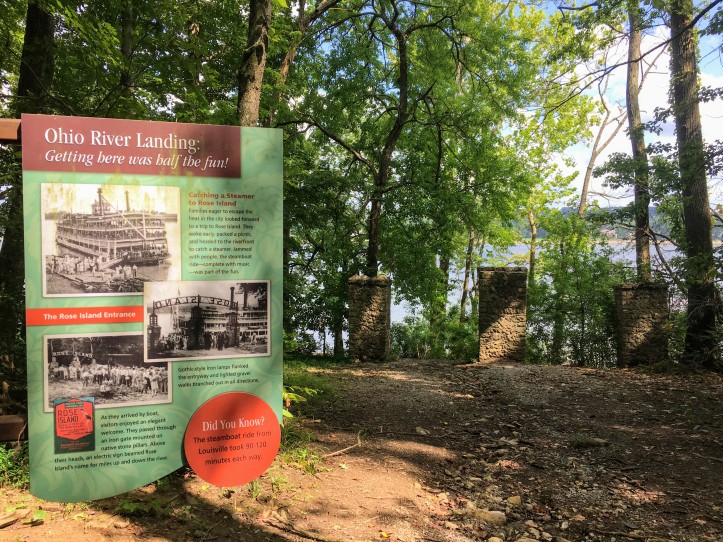 We found other unidentifiable markers and concrete foundations, old brick piles, and metal. You can see the remains of metal cages embedded in concrete where the zoo once held a bear named Teddy Roosevelt and other not so dangerous exotic animals.

Last stop before going back to our car was a patch of bee balm covered in various species of swallowtail butterflies. 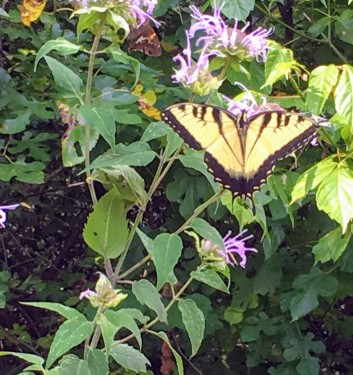 If you’re traveling in Southern Indiana or just want to make a day trip like we did, Rose Island is worth the visit. We were there for about two hours including the hike in and out. Just a small warning, the road in is paved but it is long and steep. Coming out (and back up the hill) was a challenge n the heat so don’t wear yourself out on the island.

Thanks for stopping by and reading about ours.

Tracy ~A Girl on Her Own