There’s so much to see in California that it can sometimes be hard to choose what you’ll spend your time on. But Big Sur was a high priority for us.

Big Sur is not a mountain or a park or even a town. It is simply an area without formal boundaries on the Central Coast of California. It is famous for it’s stunning views along the Pacific Coast Highway and the forests of old growth trees that inhabit the region. All around Big Sur, there are several state parks where you can hike and/or take in the coastal splendor of this relatively unsettled area of the US.

As of the writing of this post, getting to Big Sur along the Pacific Coast Highway can only be done from the North, heading south as the road south of Big Sur was buried in a landslide in 2017 and is still under repair. Although we had been driving up from the south, the slight detour in no way deterred us from seeing this highlight of our PCH trip.

So in order to get to Big Sur we had to drive inland on a detour that would bring us into the state park from the north. At first it seemed like a hassle that we would have to add an hour to our already loaded driving schedule, but once we left the PCH we were surprised by what we saw.

Just over the hills, we entered a small area of California wine country where we got to see vineyard operations of all sizes. I thought that all the grapes were grown north of San Francisco around Napa. The pastoral landscape was not an image of central California I’d ever imagined. In fact, it reminded me more of pictures I’ve seen of Italy’s countryside with rolling hills, hay fields, cows out to pasture alongside rows of grapes stretching toward the horizon. I’m so glad I got an opportunity to see it!

Once we returned to Highway 1 and began heading south into Big Sur, we were rewarded with some of the most dramatic views along the coast. By this point, Kestrel was behind the wheel and with my left foot buried into the floorboard and both of my arms braced against the sides of my car seat, I reminded myself to just breath and enjoy the view. Don’t get me wrong, he’s a good driver; I’m just a control freak trying to not be. Driving on the coastal side of the PCH is different than the inland side. You can see more clearly the sheer drop offs to the ocean and along most of the PCH there are no guardrails, just a some scraggly bushes along the gravel shoulder.

On this part of the drive, we crossed over several amazing bridges that seem to hug the edge of the cliffs, curving with the contours of the land. The Bixby Creek Bridge, being one of the most noteworthy, was built in 1932 at a cost of $200,000. It soars 260 feet above the bottom of the canyon making it one of the highest bridges in our country…don’t look down! 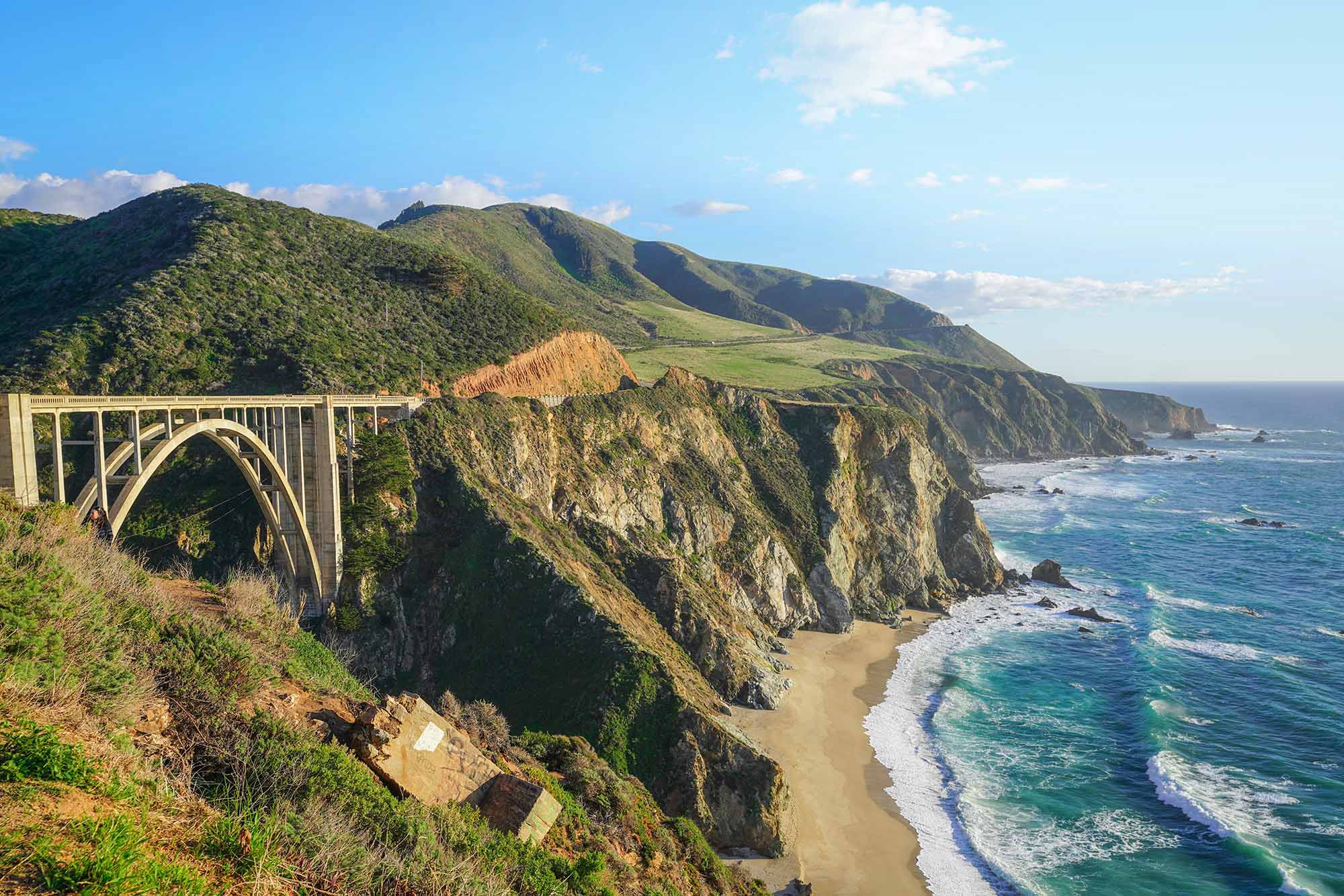 We arrived at Pfieffer Big Sur State Park around 1, so prior to our hike, we made sandwiches and ate them at the picnic area. Afterwards, Kestrel headed off toward the bathroom while I stayed with our packs. I sat, and sat, watching people pass and birds pick up crumbs from the dusty ground. It seemed like forever as I waited for him to return. Finally, I got up and took our food supplies to the car, leaving Kestrel’s pack and a Clif bar on the picnic table. Everything was in clear site as I walked only fifteen feet to the car. And that’s when a crow swooped down from a tree, landed on the table near Kestrel’s pack. As I hurried back to shoo it away, it snatched up the Clif bar (still in the package). I ran toward it yelling and flailing my arms trying to scare it, but it just flew away into the trees, the granola bar dangling from it’s beak like it was nothing!

When Kestrel returned I had to tell him the sad news. He wasn’t terribly upset as he’d bought two. True, it could have happened to anyone.

We had about four hours so we settled on hiking the Buzzard’s Roost Trail. The hike begins along the Big Sur River then climbs through shady redwoods and winding cutbacks higher and higher an exposed sunny ridge with a panoramic view of Sycamore Canyon and the Santa Lucia Mountains. On a clear day, you can see the ocean to the east.

Thankfully for us, the temps stayed  in the mid 60s when we shouldered our packs, crossed the river and started up the trail. We journeyed past thick redwoods with bark blackened from a forest fire, but still very much alive. The trek was a steep uphill grade that got more challenging the higher we climbed. We passed a few people as we climbed. Some we saw later join us at the top, others must turned back. I couldn’t blame them, the trek was really tough.  At one point, my ears popped from the altitude. As we neared the top, my breathing had increased heavily, as if I was finishing a 5K race.

Along the hike, sadly both of our phones were nearly dead. It’s hard to get a good charge when you’re spending every night in a tent and our car charger was lame-o! Still, I managed to take some pictures of mountain wildflowers along the path.

When we got back down, we sat on a giant fallen tree spanning the river and I wrote a blog while Kestrel drew the leaves on a branch. It was a beautiful and inspiring hike, the adrenaline of climbing and standing at the top looking down on the beauty in our world still hummed in my chest. Just FYI…we are, in all reality, so small.

Thanks for reading and joining the journey! Next Stop…Golden Gate Bridge and Muir Woods!