We woke to a light misting rain falling on our tent. In no hurry we stayed undercover reading, writing, and drawing. When the rain ended We packed up our tent and got back on the road. Today we’re be starting our journey with a trip to the Los Angeles County Museum of Art (LACMA) in L.A. one of Kestrel’s main wishes on this trip.

AS we leave the Santa Rosa Plateau, we have to ascend the steep road we came in on.  This time, in the fog. 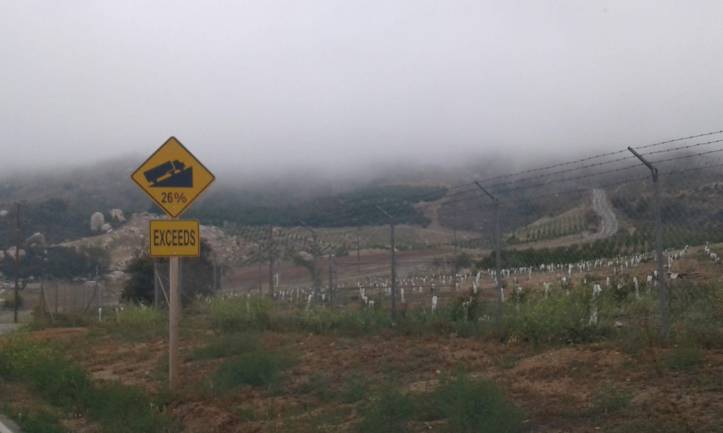 Even though the woman at the car rental place warned us to keep to flat ground with the car we selected, in low gear, our Nissan Versa zoomed up the curvy climb back onto the high roads. Perhaps it was just her way of trying to get us to upgrade to a larger heavy duty mountain kind of car!

When we reached the small town of Wildomar, I drove toward the only gas station and made my way to turn left. Unfortunately, the road markings had been scraped away for resurfacing and I ended up in the lane of oncoming traffic. Quickly I turned on my signal and checked my rear view I had just enough room and time to get back over. There was an SUV coming up quick and instead of slow down, he laid on his horn and veered around me going about 30 mph.

Rattled by his reaction and upset that I had to miss the turn to get gas, I complained out loud. “It seems like no one around here has time for anyone!”

It didn’t feel like they had time for me 😦

I drove onto the highway and decided to get coffee and gas at the next exit. Driving into L.A. on a seven lane highway, Kestrel dozed and I was left with my own thoughts. It would be hard for me to live in Cali, I thought, I don’t know if I could ever get used to the way people drive. A lot of them are in a big hurry and they take huge risks, sometimes passing at high speeds with barely enough room to squeeze by. It freaks me out.

But I think the part that gets to me the most is they seem to have forgotten that we’re all still human beings inside these shells of metal and plastic. We’re not just cars on a road going somewhere. Kestrel says I shouldn’t react emotionally to what they do, and I guess he’s right. I shouldn’t take it personally, their actions are not about me. They don’t even know me.

But the problem is that I am a person. We all are, we just can’t see each others faces.

The day before we saw the result of a five car accident in the express lane where people actually pay more to drive faster. It wasn’t a pretty sight.

After we leave L.A. and the art museum, we drive to Santa Monica and park to walk on the beach and the famous Santa Monica Pier. IN addition to all of the rides and the wonderful food smells on the pier, we saw street performers singing and dancing for dollars. It felt really good to slow down for a while and mingle with crowds of smiling faces. 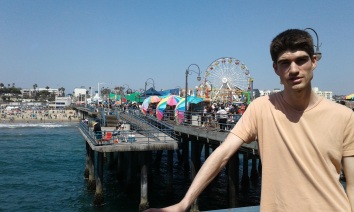 From Santa Monica we entered the Pacific Coast HIghway! Driving along the coast with mountains spilling into the sea on our left, life seemed to slow down a little bit. The speed limit on HIghway 1 averages 55 instead of 70 and with only one lane instead of seven, there’s less to worry about. All along the sides of the road, people had parked and were either visiting the  beaches or climbing the sandy hills. The pace and tenor of life simply slowed down for us.

After three hours on the PCH, we left the highway just south of Santa Barbara and headed west into the Los Padres National Forest.

The road, an 11 mile climb, twisted right and left upward. The sun slipped toward the horizon and even with sunglasses I couldn’t see much beyond the road right in front of me. At one point, I felt like my peripheral vision had vanished and I was driving through a tunnel at the top of the world. All I could see was the white globe and the small patch of road before me. Suddenly, I was on a narrow bridge holding my breath, white-knuckling the steering wheel!

A mile or two past the bridge, we turned off that main road onto the park road and a sign that said Speed Limit 25, Whew! We made it – still alive.

To be honest, I’m not the BEST driver in the world. I’m cautious and sometimes I drive too slow. I hesitate when I probably should just go. But at the same time, I also take life seriously and I know that we are more than just cars when we’re driving. We’re real humans with needs and getting somewhere isn’t the only one of them. Probably not the most important one anyway.